Rain, hail, gales, rainbows, waterfalls and even a waterspout made for a memorable return to the Great Ocean Road after an absence of five years.

This time around it was a wintry four-day visit to the Port Campbell area with my brother Scott from Early Bird Photography. 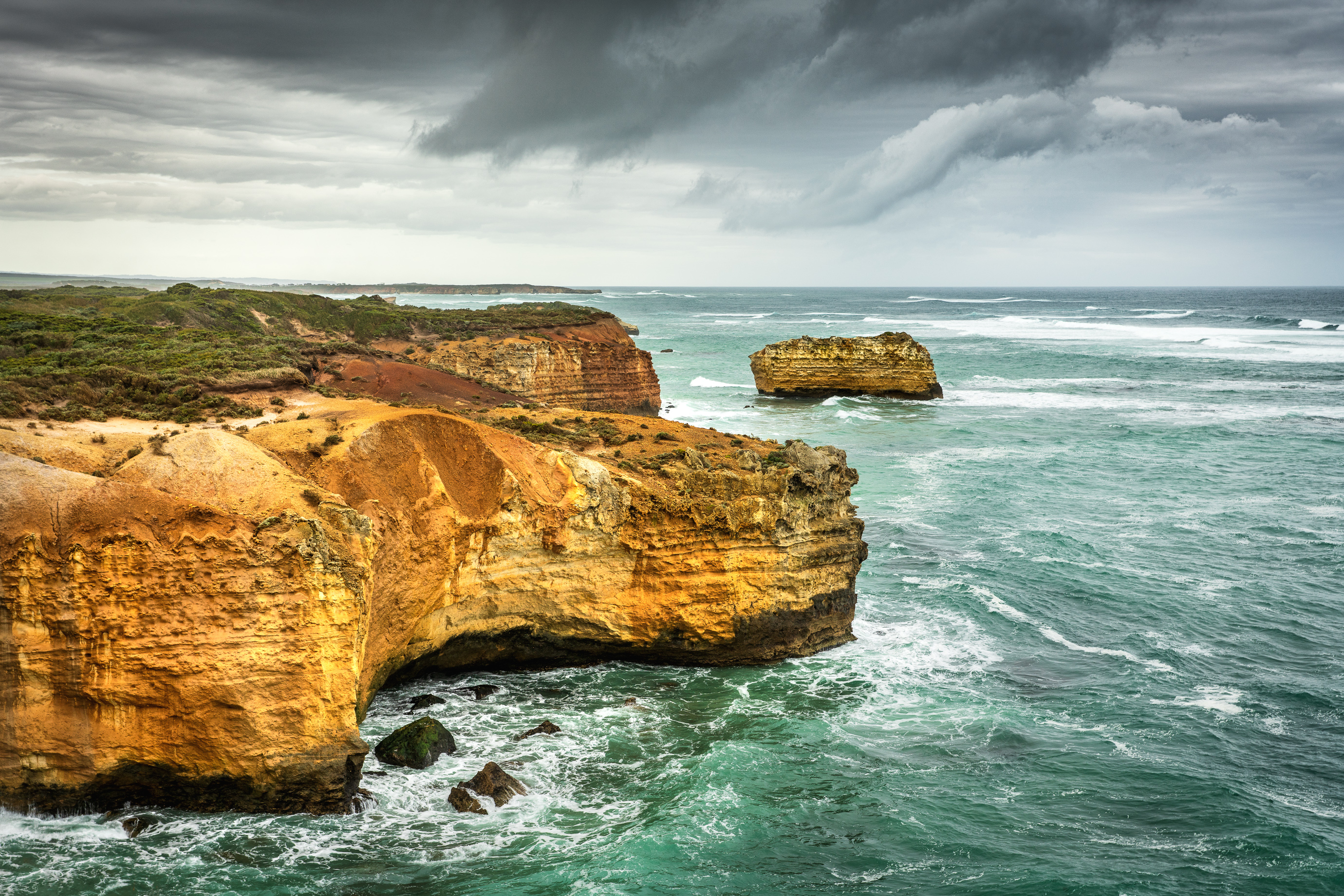 It’s a real roll of the dice weather-wise when you are tempted by those cheap flights and lock in a trip well in advance. I had a keen eye on the forecast for the week leading up to my flight to Avalon. Safe to say it was going to be cold with strong winds, heavy rain, and thunderstorms.

This proved to be accurate as we arrived to news reports of a fierce cold front and an unusually long spell of severe weather for the country’s southeast.

Not ideal, but it was August after all. Let’s face it, the weather on the Victorian coast is unpredictable at the best of times, and on the flipside I would have been disappointed with clear skies.

The challenge had been set to make the most of our opportunities in this genuinely stunning area. On the upside, it was a real treat to see the spectacle of waterfalls flowing over the cliffs into the ocean – even if the menacing wind gusts were often forcing them upwards!

The constant showers brought tantalizing hints of rainbows, so I kept the polarizer at arm’s reach in expectation. I was definitely in the right place at the right time when this rainbow appeared over the spectacular setting of Island Arch. It quickly vanished, and moments later our backs were turned on another horizontal drenching from the west. 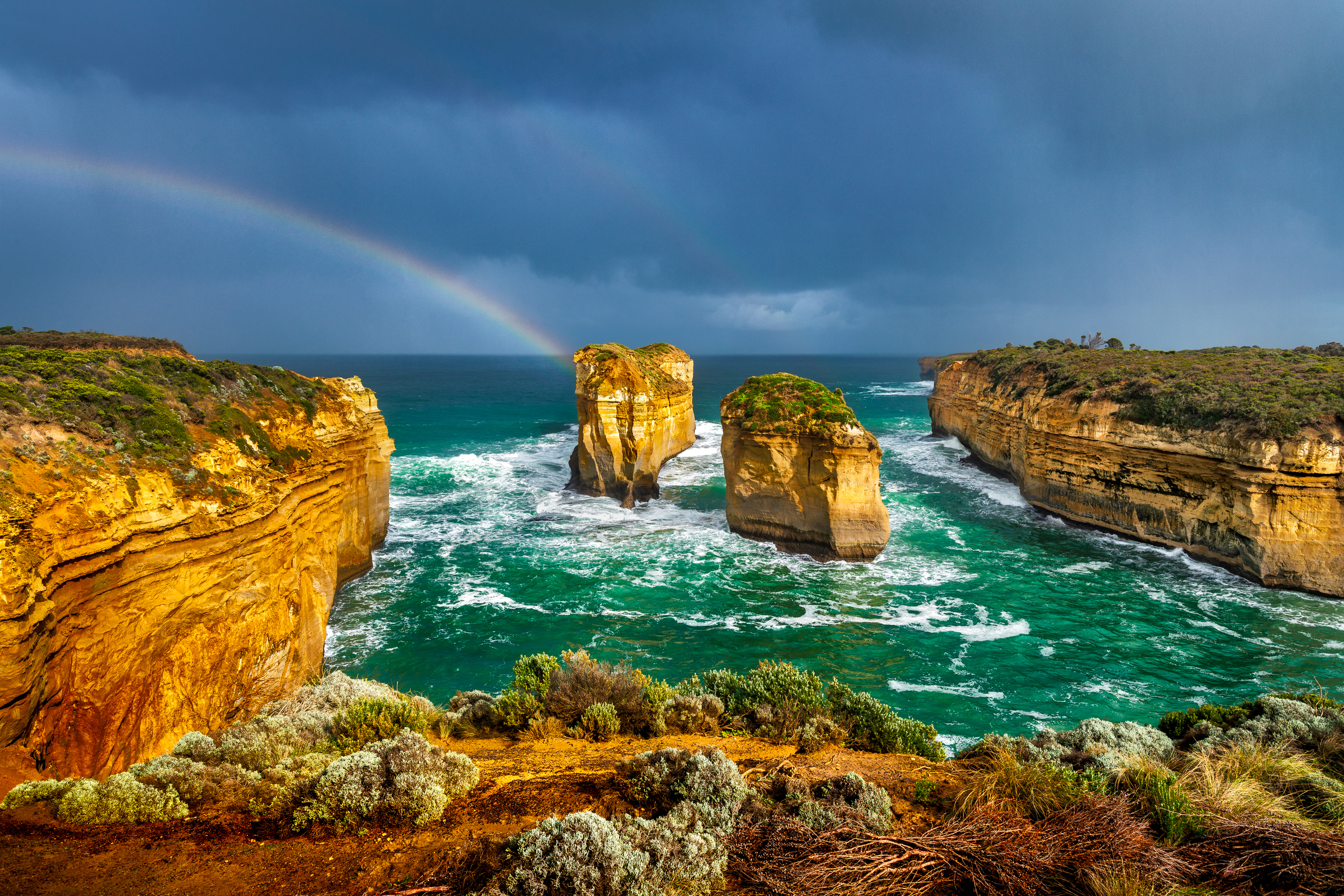 We spent many hours patiently watching the heavy sky, waiting for the slightest hint of interesting light, or warmth of colour.

With fading hopes of seeing a sunset, this distinctive cloud off Port Campbell caught my eye. It looked unusual, so I quickly threw on the 70-200mm lens. We didn’t see a sunset for the four days, but I had seen a waterspout for the first time ever. Quite a sight! 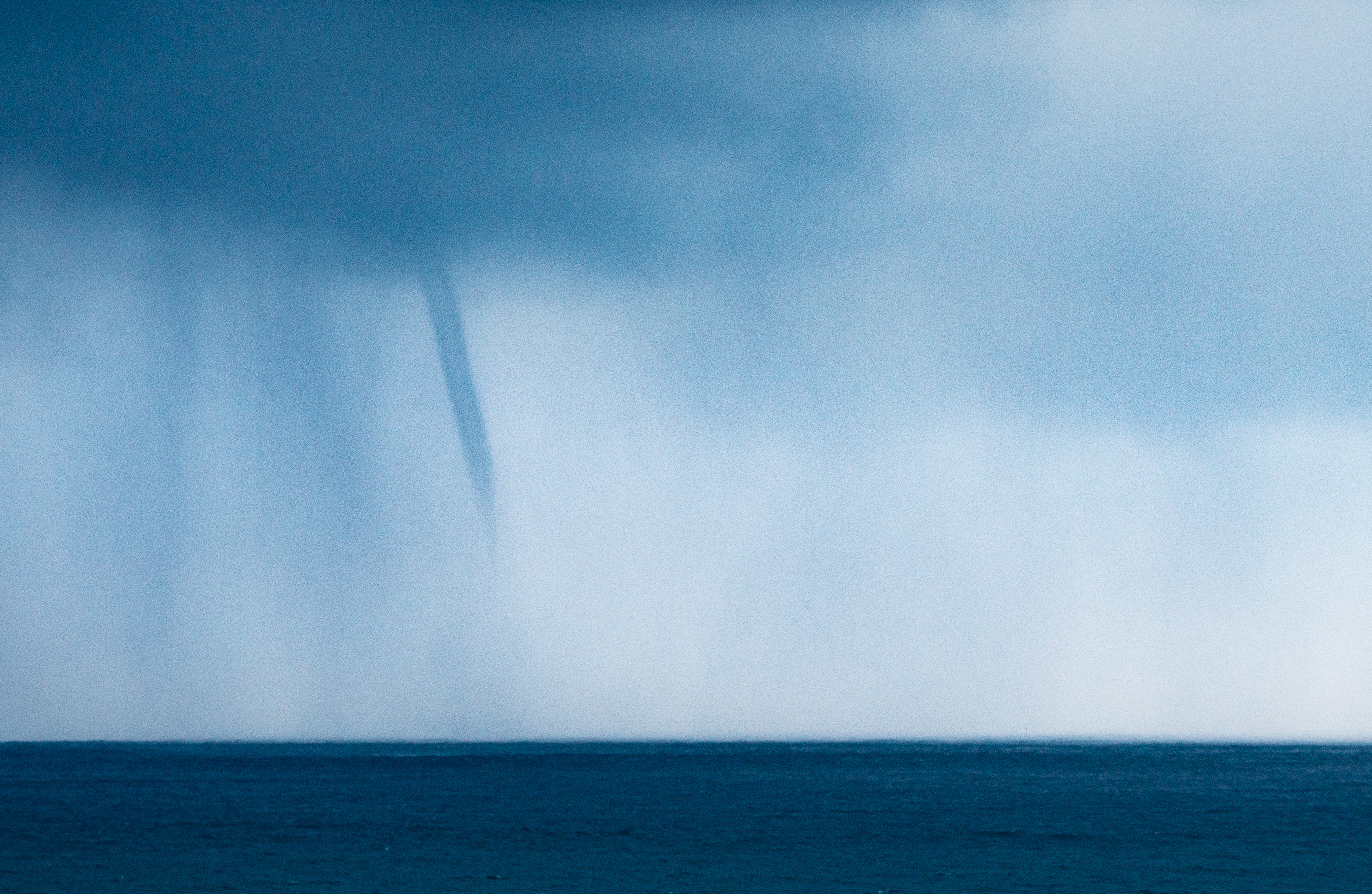 Probably the only few minutes of warmth in the sky for the entire four days came just after sunrise on our third morning. Thankfully I had a good composition lined up, and this resulting moody image from Port Campbell NP is my favourite of the trip: 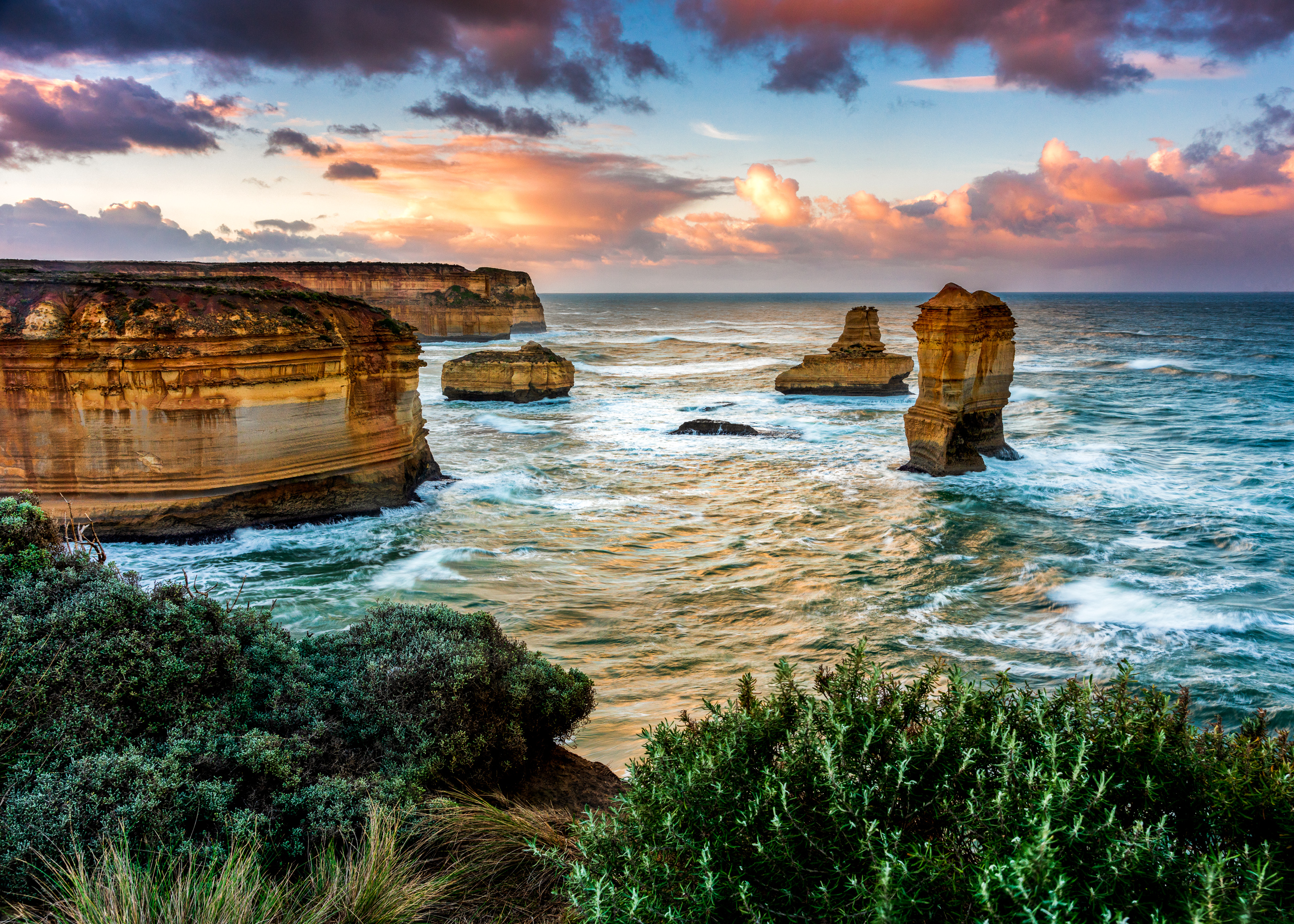 We took full advantage of the opportunity for some exploration and location scouting for future trips, discovering some very nice spots which were not only spectacular, but also off the radar of the busloads of sightseers we encountered at all the major vantage points.

Location scouting is all about finding great spots for future reference, but it’s not always at the right time for the light. When I find an interesting spot I like to grab a few shots on my phone to remind me of compositions for next time.

One of my favourite images of this trip is one such iPhone pic, taken while scouting out the location near the ‘Baker’s Oven’. I’m kicking myself that I didn’t replicate it there and then with the main camera. This spot is definitely towards the top of the list for next time. Such a shame the waterfall can’t be guaranteed, as it really completes the dramatic scene. 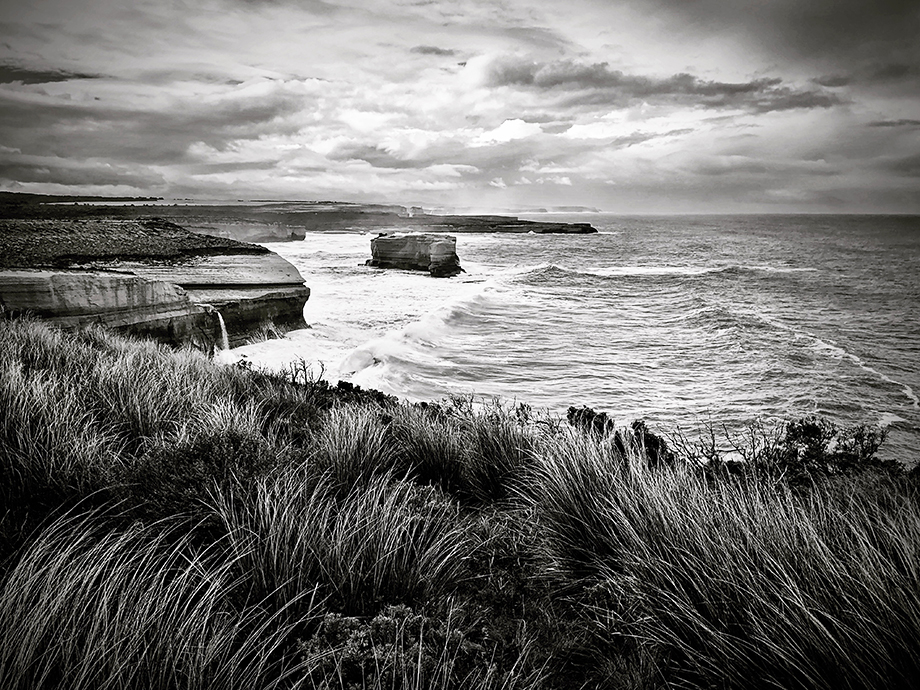 Heading home we did the touristy thing and stopped off at the Twelve Apostles, and were almost blown off our feet by the ferocious westerly. Despite the buffeting, it was still worthwhile stopping to capture this memorable scene of the waterfall near Gibson Steps being blown skywards. 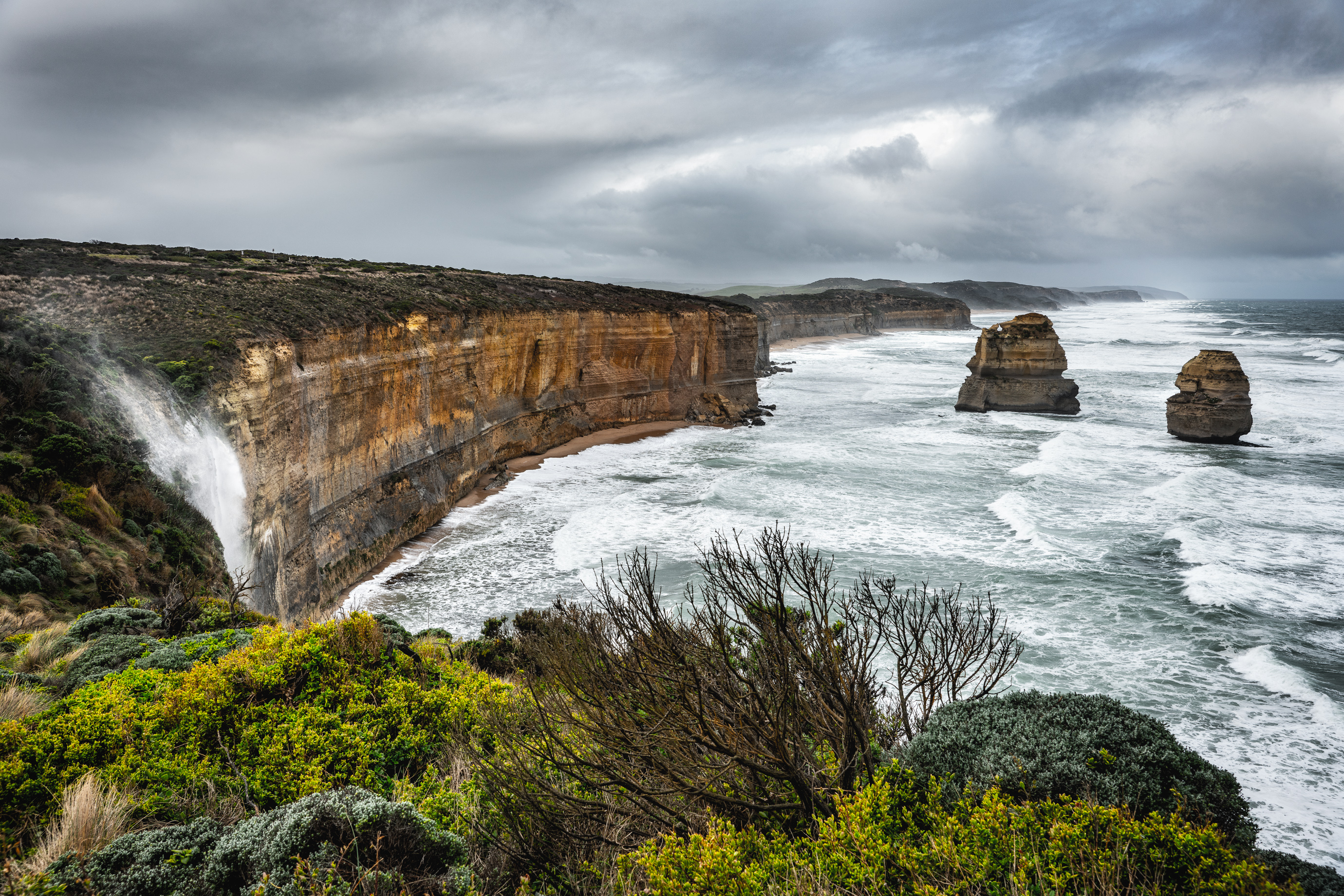 After this wild but enjoyable short stay there’s so much unfinished business. One thing’s for certain; I won’t be leaving it another five years before I return to this amazing stretch of the Australian coastline. 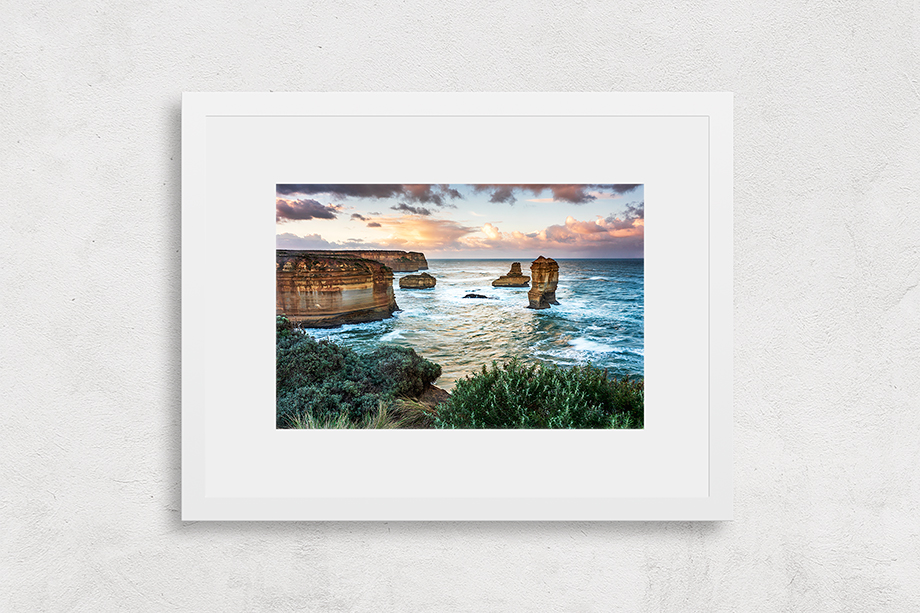 Sign up with your email address to receive news & updates from Girt By Sea Photography. Subscribers are rewarded with 10% off the price of print orders (offer extended to 31 Dec 2020, excludes custom framing & already discounted items). You will receive no more than one email per month.

Your email address will be used responsibly and solely for the distribution of the e-newsletter in accordance with our Privacy Policy. 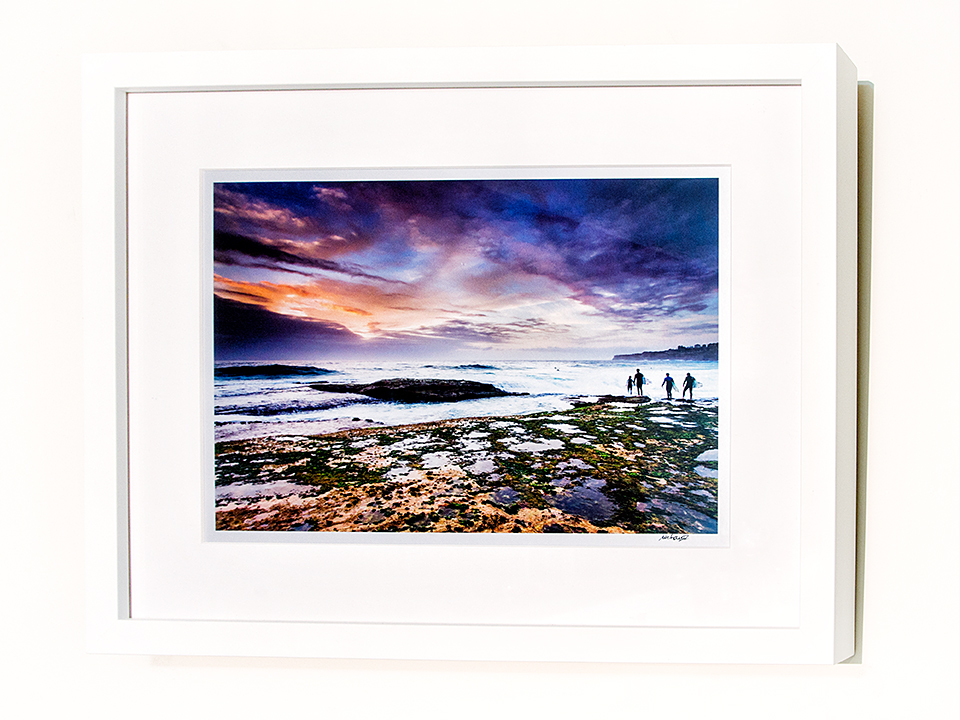 These beautifully presented ex exhibition works are professionally framed to high specs, and are now on clearance (from $129). Includes free delivery in the Sydney metro area.